Sooooo… parents are waiting in Havana International
airport for daughter to fly in from Colombia. A long time ambition to visit Cuba, combined with not having seen daughter for a while, culminated in the Cuban adventure that prompted the previous blog. There we were, waiting patiently all ready to greet our wandering daughter. A text comes through; she’s landed and is in the airport. Another text comes through; the luggage is taking ages, how could Cuba take longer than Colombia? Then another text comes through “An official has taken my passport” or words to that effect. Now we knew what that meant, and we were confidentthat all would be well once the questioning had taken place, even so.. once that passport is in the hands of an official, your life, or at least your travel life flashes before you. All the places you have been that you can’t really remember, all the people you have met that you don’t really know and the comforts of home that once seemed so boring and now seem so attractive. Anyhoo, long story short a couple of delightful dogs did some serious investigations of our daughter’s baggage while she answered questions that in her opinion made everything worse “Who are you travelling with?”
“No one”
“What were you doing in Latin America?”
“This and that…”
“Do you have a job?”
“Nope!”
Not great answers until they asked “Are you meeting anyone in Cuba?”
“Yes, my parents, they’re waiting in the airport now.” How respectable is that?! Her passport was returned.
The problem is that Colombia has a rep’ a rep’ that worries anyone planning to visit and means that passengers flying into Cuba, or anywhere, from Colombia are carefully checked! But that reputation is increasingly undeserved. Colombia is the land of free WiFi and caramel chews, not so much the cheap cocaine and random shootings. It would be naïve to suggest that all is well in the land of emeralds and El Dorado, but in 2012 Colombia was voted the happiest country in the world, much is improving, much is better, but it was not always thus, hence the rep’.
If you have logged onto IMDB recently or just been browsing the web, you have probably noticed Netflix’ big campaign for you to binge watch the new series NARCOS. NARCOS is the dramatic retelling, with a touch of reimagining no doubt, of the story of the hunt for Pablo Escobar, Colombia’s notorious drug dealer and largely responsible for that dodgy rep’. The story centres on two DEA agents, one US and Spanish who went down to Colombia to try and stem the seemingly endless supply of drugs to the US. The two agents Steve Murphy and Javier Peña were consultants on the series and the series itself cuts between genuine news footage and drama, casting is carefully done. Director José Padilha has been  a documentary director, credits include Secrets of the Tribe and Garapo, the news footage and his directorial talent anchors the piece in reality. The consultation process informs the series so the actors, Boyd Holbrook as Murphy, Pedro Pascal as Peña and Wagner Moura as Escobar do genuinely reflect the characters they play. 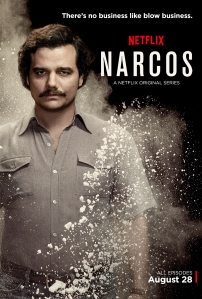 nuanced than the one the fictional Vincent Chase delivered in the series Entourage). A Brazilian, he had to learn Spanish, put on weight and wear a false moustache to play the role of Escobar. Apart from all that he has an astounding baritone voice, whether this is reflective of the real Pablo, I don’t know but it is an effective weapon in his performance, aside from the other weapons in the course of his performance.  The narrative switches between the hunt for the drug lords and the rise and rise of Escobar. The series has a voice over narration, which is witty, direct and delivered with full gravelly voiced charm by former model and minor Gone Girl character, Boyd Holbrook as Steve Murphy. The voice over is useful as it identifies the crucial players in the real life drama as well as the history and context that you need in order to understand how this beautiful and wonderful country became hijacked by one man, who saw drugs as his business and politics as his right. 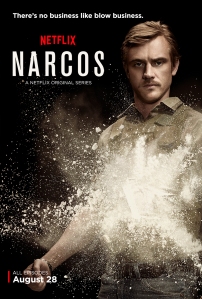 DEA agent Murphy are played by Holbrook offers a sophisticated take on the dilemmas of a cop who not only loves his job, dangerous as it is, but the country that he has adopted in order to do his job. Murphy comes married with a feisty wife played by and  must cope with the consequences of being on Escobar’s wanted list. Pedro Pascal, last seen in a frock coat in Game of Thrones, well mostly in the coat, doing a favour for Tyrian Lannister that did not go well, plays the Spanish agent Javier Peña. 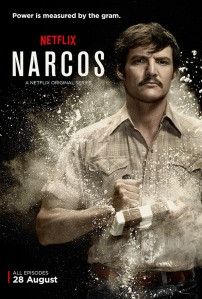 Peña bridges the cultures and the languages as they struggle to pursue their very clever and elusive nemesis. Peña is more pragmatic and perhaps portrays more compassion for the ordinary Colombians caught crossfire.
The show is billed as bilingual and plays out in both English and Spanish, if they would speak English then English is what you get, if it’s Escobar or the Colombian politicians on screen then it’s Spanish which means you have to read subtitles for over half the series – deal with it – it’s worth it.
NARCOS combines the drama and excitement of a good old fashioned cop drama with a genuine attempt to get to the truth of the matter. There are short cuts on some of the real characters and occasional speculation re some events, but if you don’t want spoilers don’t look the characters up on Wikipedia – at least not until after the series!

Netflix billed this as their next Breaking Bad, it is very different. The first series does not solve any of the problems that faced Escobar’s Colombia, but it does chart the chase and leave us wanting more.

Spoiler Warning- don’t look if you haven’t yet seen SkyFall!

So as Sarah Lund (Sofie Grabel) takes to the screen for the last time and (spoiler warning) and M bows out of James Bond, it’s getting harder, not easier, to find serious female representations for us older or even younger ladies to enjoy. No doubt there are  a variety of young women rushing round our screens in sci-fi (Continium) or in violent high kicking spy stories (Hunted), and there’s female payback in Lisbeth Salander (The Girl With the Dragon Tattoo) but serious women in authority, certainly on this side of the Atlantic, is hard to find. Recently, that stalwart of BBC Radio 4,  Woman’s Hour has started a hunt for Britain’s 100 most powerful women, which set me thinking, who are fiction’s 100 most powerful women? In fact to be fair to proportions between population and books who are fiction’s ten or twenty most powerful women? If you exclude from power the ability to kick a chin from a standing start and substitute that for being the woman who runs the show, I’m struggling to think of someone… anyone.

None of those are British – these are: 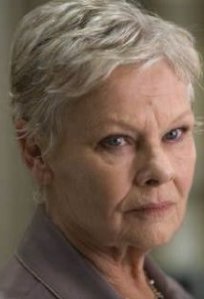 … but they are gone.

No doubt readers can think of other women characters that capture their imagination, but the overwhelming sense to me, at the moment, is that there are not many and that there are less and less examples. Even in one of my favourite shows, that makes no bones (almost literally) about the role and function of women, The Walking Dead, there is no one older than fifty – really in that world?

All the women featured are beautiful and if not young (sorry Laurie Holden but I remember the X Files) they are youthful and beautiful. The only aged member of the cast is that consummate actor Scott Wilson and whilst the lead characters may have to be represented by men in their prime, why is there an assumption that in a post-apocalyptic dystopia some formidable older lady would not still be alive and giving the men what for? Take a look at this lady

I rest my case.

The great thing about Judi Dench’s M and Birgitte in Borgen is that they are roles for women above the men in authority. In so may representations the women may be strong, intelligent characters, they may even be the protagonist, but they must battle the men. Carrie Matheson must battle the men, as must Saga in The Bridge, one wonders whether their mental illness is a metaphoric representation of the attitude to women in authority. Women in the workplace are still defined as aggressive, awkward or emotional if they present their case rationally and forcefully.  In other roles, Jemma in SOA must match the men in her accuracy of shot, as must Andrea in The Walking Dead but both are still subject male authority. Sarah Lund also manages her life in a man’s world, making the decision to sacrifice her role as a mother to her work, but at least she wears a jumper and some sensible shoes! Dana Scully (Gillian Anderson), who held her own with her scientific mind compensated for that by some seriously impractical high heels

Don’t get me wrong I’m all for a bit of scopophilia male or female, but that alone is not a satisfying representation, not if you purport to offer insight to the world as it is or could be, women past the menopause do still exist and while young women are offered representations such as Katniss Everdeen in The Hunger Games, by the time they are thirty they will be starting to wonder what happens when they pass fifty. Hell! What happened to Buffy?