1966 and All That is an appropriate title for an exhibition of photography in St. Leonards-on-Sea, just down the road from Hastings, and it was a chance for me to bask in some reflected glory. It is an exhibition of the photography of an old friend, Graham Keen, whose chronicling of the Sixties of fifty years ago, conjures the atmosphere of a year that refuses to fade into history, a year that is as far away from the young of today as the First World War was to the teens of 1966. 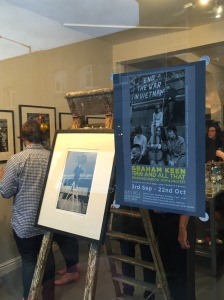 Proof I was there!

1966 and All That is at the Lucy Bell Gallery in St Leonards-on-Sea, featuring the photographs of Keen, who spent some of that decade photographing the up and coming and the already famous of that time. He was there when Yoko Ono went up a ladder and when John Hurt was nowhere near an alien. He was there when Marc Bolan (then Mark Feld) marched with Vanessa Redgrave, Joan Baez and Donovan against the Vietnam War. He was at Ready, Steady, Go! with the Rolling Stones, he photographed Muhammed Ali meeting Michael X (yes Michael X, Black Power in Britain), the Kinks, The Who  and many more. That was the year of rock and revolution!

See if you can spot Marc Bolan

Alongside the photos of rock and rollers such Jagger and Daltrey, are haunting photographs of artist Alberto Giacometti, pictured both solo and in conversation with Francis Bacon – perhaps they were talking beer perhaps art, but the photos are compelling, iconic. John Hurt and Jonathan Miller look on, Ginsberg howls, Ray Davies is wistful and Sixties specialists will remember John “Hoppy” Hopkins co-founder of International Times where Keen also worked and there is William Burroughs who worked with Graham on an adult comic called Cyclops. 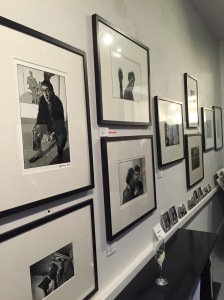 Portrait of the artist as a young man

The Guardian has nominated this exhibition as one of the  “must see” exhibitions of Autumn 2016. If you are in the area take a look, if you are online, images are available to view and purchase from the Lucy Bell Gallery.

Meanwhile the Guardian itself has populated its pages with other retrospective reflections on the glory of 1966 and as I bask in the reflected glory of Graham’s achievements I must point also to the work of another mate (I know, name drop city) Steve Turner, whose biography of Johnny Cash is considered definitive and whose expertise on the music greats and the Beatles is a force to reckon with, Steve is set to offer us another take on 1966: Beatles’66 A Revolutionary Year is to be published in November.

1966 and All That documents the glory and the talent of the time, and is on until 24 October. I guess we all do still bask in a little reflected glory.